I recently visited the Dungeness nuclear power station visitor centre. The information I read and the videos watched were clear and informative, it made sense and seemed to be without propaganda.

The same evening I researched the points made and looked for opposing viewpoints. The nuclear industry won the arguments hands down. I discovered references to past accidents and pointers to the safety levels achieved over the last fifty years (U.K Sites), and the track record of safety is impressive.

Greenpeace and other environmental protest groups fail to argue objectively. Their arguments always point toward the three major accidents of the last thirty years. For this article will go further than the three accidents. In fact there have been five serious accidents (core damage) in the world since 1970 (one at Three Mile Island in 1979; one at Chernobyl in 1986; and three at Fukushima-Daiichi in 2011). All correspond to the beginning of the operation of generation II reactors. This leads to on average one serious accident happening every eight years worldwide. 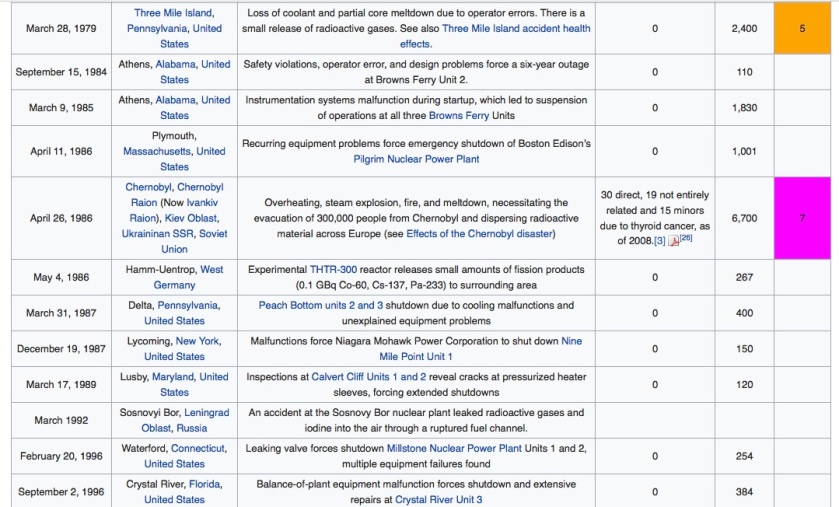 Initially, the track record seems disastrous, and indeed this information would be excellent propaganda for the likes of Greenpeace and other environmental activists. However, we have to go further and consider the safety record of the whole of the generation of worldwide electricity. We must include fossil-fuelled plants to allow for a more informed platform of thought on the safety of nuclear power plants.

Comparing the historical safety record of civilian nuclear energy with other forms of electrical generation, Ball, Roberts, and Simpson, the IAEA, and the Paul Scherrer Institute found in separate studies that during the period from 1970 to 1992, there were just 39 on-the-job deaths of nuclear power plant workers worldwide.

Regarding overall energy accidents, hydroelectric plants were responsible for the most fatalities. However, nuclear power plant accidents rank first regarding their economic cost, accounting for 41 percent of all property damage. Oil and hydroelectric follow at around 25 percent each, followed by natural gas at 9 percent and coal at 2 percent. Excluding Chernobyl and the Shimantan Dam, the three other most expensive accidents involved the Exxon Valdez oil spill (Alaska), the Prestige oil spill (Spain), and the Three Mile Island nuclear accident (Pennsylvania).

Fossil fuel generation does seem to have its problems. And the death rates cannot be ignored as low. To dismiss these figures demonstrates an ignorance of the reality. I chose not to include the deaths of coal miners, and oil and gas workers in the same sixty plus year period. Although, if these figures were to be included the picture would look even more terrifying.

We should touch on the sources of radiation which exist on Planet Earth. The graph shows the sources and percentages. The information also indicates the amount of radiation a nuclear power plant worker is subjected to each year compared to the general public.

Assessment of this knowledge means we should consider the anti-nuclear argument of pollution produced by nuclear fuel is flawed: Many people believe the nuclear industry pollute the atmosphere. I could argue the fact that fossil burning cars pollute the atmosphere at a catastrophic level. And with the thought, electric vehicles will account for sixty percent of vehicles by 2030. Electricity produced by nuclear power stations is cleaner and safer than fossil fuelled generators. Therefore the electric car and nuclear power will help repair the damage of a century of fossil fuel damage.

The conclusion is that the arguments against nuclear energy production are directed at the primary disasters and not at the actual outcomes of the accidents. The second argument against nuclear energy is the cost of clearing up after the accidents. And the environmental damage incurred. The price is picked up by the taxpayer. However, we should consider the taxpayer picks up the bill for many disasters. The disaster of war and the deaths involved are paid for by the taxpayer. I accept this is not an argument for nuclear accident cleanups. The point is, the taxpayer usually picks up the bill for 99% of disasters and accidents, whether natural or man-made.

As the world population increases, demand for power will also increase. The need for cars and commercial transport will rise in line with the population. And if the people wish to use transportation and live in well-lit homes, use fridges, freezers, air-conditioning units, etc, they will have to accept the massive amounts of energy required need to be produced by efficient methods. There is no running away from the certainty nuclear power is here to stay. It is no use fighting the inevitable unless there are valid alternatives.

I finish this article with another aspect of my feeling of nuclear electricity production. It is evident I believe this power source is as safe as other production methods. I would guide you to read the statistics provided in this article. Read them with care, and you may find the argument for nuclear energy pretty compelling.

Over the last few days, I have spoken about my visit and research to a few people. What amazes me is that those who are against nuclear energy tell me that I have fallen for the nuclear industries propaganda. And this information is a lie. In fact, I do not believe this to be so, and anyone who thinks I am subject to indoctrination is implying I am an idiot and easily fooled.

The importance of finding the correct and accurate information relative to any subject is essential. I find it difficult to find anyone against nuclear energy production who does not use the Chernobyl – Long Island – Fukushima – accidents as evidence of the dangers of atomic energy. As humans, we move on and learn from our mistakes. The nuclear industry demonstrates they take safety as the number one priority. It is easy to ignore the horrendous track record of the fossil-fuelled energy production. It is easy to overlook the damage of the petrol and diesel engined cars and trucks. The reality is the human race requires energy and nuclear electricity is here and possibly fuelling the computer which allows me to write this article. I know this much, you would soon complain if your home had no light and no heat. Fossil fuel is damaging and will run out. The population must surely accept the inevitable over the next three centuries. Fossil fuels have caused immense damage to the Planet’s environment. Air pollution, oil spills, mining and generator plant deaths are four examples of the catastrophic dangers of energy production. If the human race demands electricity in the future, they will have to accept there will be risks involved in the production. The alternative is for the human race to take control of growth of the population, so the demand for energy diminishes. I cannot envisage humans accepting their part in the ecology of the Planet any time soon.