I have decided to begin a long term photo project. Based on a belief that the type, make, or the price of a camera is of no importance to the quality, and more importantly the composition of the final image. There is no suggestion a throwaway snap-shot camera will provide the same quality of pictures made by an SLR or rangefinder. However, it is possible to demonstrate a low priced 35mm film camera is a viable alternative to higher priced ‘professional’ models.

→Helmut Newton sometimes used a Canon EOS 100 and Canon EF 35mm 2.8 – 50mm 1.8 and 85mm 1.8 lenses. Although he photographed with many other cameras: the fact he used ‘amateur’ equipment for professional assignments is a testament to the: ‘not what you use – it’s how you use it’ school of thought.

After ten minutes searching on eBay, I discover two EOS 5000 cameras. The pair are purchased for eighteen pounds including postage. The 5000 is chosen because it does not have light seals or the dreaded shutter cushion found in the following EOS film cameras. (The shutter cushion deteriorates and causes problems inside the film chamber). It does have an easily replaceable mirror cushion. After delivery, the cameras were inspected: both function correctly, and the mirror cushions are in excellent condition. 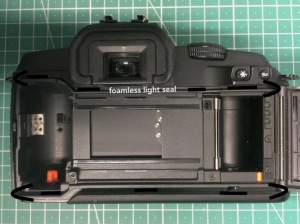 One camera had the infamous sticky ‘rubber’ grip, a problem for many buyers. Worry not; buy a bottle of methylated spirits, soak a tissue in the spirit and wipe away the ‘sticky grippy’ residue. You’ll use around fifteen tissues to remove the rubber finish: After removal, you’ll never know it was there or why it was needed in the first place.

Basic automatic and semi-manual settings are the order of the day. In manual use, the user selects the shutter speed, and the camera finds a suitable aperture. There are four ‘pre-set programs’- portrait – landscape – macro – sports. The pre-set is aperture/shutter processor. Choose portrait and processor leaves the aperture wide open (for a shallow zone of focus). Choose landscape and aperture is small (deep zone of focus). Choose sports mode, and the shutter speed is high. Macro seems to be the smallest aperture possible. The presets will be used when needed. The fully auto setting indicated by the green rectangle marking will be the most used setting for this project. Helmut Newton preferred auto metering, so I’ll follow his lead.

Both cameras have their identities black taped. There is an advantage of black taping a camera if it is used for candid snapshots. People do not seem to notice the camera. Do not ask me why this works. I’m convinced the subjects do not see a black taped camera as quickly.

Another eBay find is four UltraFire CR123A rechargeables for six pounds. As I already have four CR123A’s and a charger; the battery situation is well covered. Incidentally, the cameras use two batteries. The rechargeables will last for around thirty cassettes of film.

I own Canon 40mm and 50mm STM lenses. The combined cost of the 40 and 50 was one hundred and fifty pounds. Cheapish purchases which prove if you keep looking, bargains are to be discovered. I may take the project further and purchase an EF 85mm 1.8. For the moment the 40 and 50 will be sufficient for the work in hand. It will be interesting to discover which makes the better ‘standard’ lens.

Once fitted with batteries the camera is good to go. Loading the film is simple, extend the leader to the orange mark, close the back, and you’re ready. After the back is locked the motor rolls out the film onto the take-up spool. As every frame is exposed, the film is returned into the cassette. A led counter shows how many frames are left. Photographers should expect thirty-seven frames from each cassette.

The film will be developed using the classic Rodinal: diluted 1+50 and processed for twelve minutes at 20 degrees C. To test the consistency of exposure and focus I will alternate between the two cameras. It will be interesting to see if the negative density is the same for each camera. 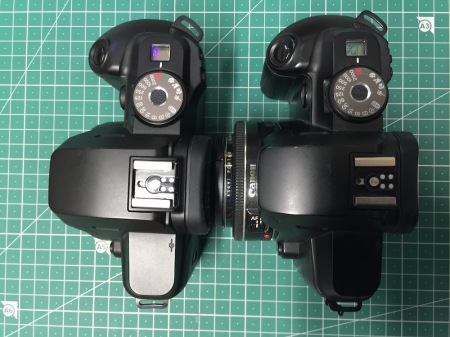 The slowest shutter speed is one-eighth of a second. There is no concern for this apparent limitation. The reality is slow shutter speed is rarely used by photographers. Use open apertures and the fastest possible shutter speed to attain sharp images. Many so-called experts write about lens sharpness, they fail to acknowledge the certainty most ‘out of focus images’ are in reality ‘blurred’ from camera shake. Overcoming camera shake takes practice: the trick is to frame the picture – gently press the shutter and keep the eye to the viewfinder until the shutter returns. Another secret is to keep the eye open during the exposure, do not blink!

Over the coming weeks, I will write about the performance of the cameras and how they cope with different photo-projects. One cassette of film will be used for each subject type. For examples, portraits, motor cars and motorcycles, houses, architectural aspect of a building. The guideline is the same: one subject one cassette, thirty-six exposures.

From Film to Computer:

The choice is to scan the negatives using a basic Plustek scanner. It seems ironic the scanner is more expensive than the total cost of two lenses and camera bodies. Some people worry about the expense of using film. To my mind it is insignificant: Ten cassettes of 36 exposure FomaPan 100 can be purchased for thirty-four pounds including postage. A bottle of Rodinal developer costs fourteen pounds. By the way, 500ml of Rodinal will process eighty rolls of film. Stop bath and fixer is no more than ten pence a film.

Work on thirty-pence per film for chemicals and three pounds forty pence for the film: we can conclude it is a cheap hobby. A photographer could take a whole day to use a cassette of film. What could be more affordable? Once you begin to print the negatives in a darkroom the process becomes expensive; although I’ll show ways to use a hybrid darkroom later in this series of articles. Hybrid? Yes! The scanner is used for most of the work, and exceptional negatives are wet printed.

The EOS will be loaded with film, and the project is portraits. One cassette and a series of images taken with either 40mm or 50mm lens over the next five days. Develop the film, scan the negatives and write the following article.