Lomographers are a cult of photographers who take images using analogue (film) cameras. They scorn the pixel and prefer the chemical. Their nomenclature arises from a Russian camera called a Lomo. It is a 35mm pocket camera which is none too reliable and records remarkably good images. The original is now replaced by a newer and apparently more reliable version which sell’s for 300 pounds. A touch too expensive for my pocket. The originals can be purchased and repaired for half this amount, and I still wouldn’t buy one.

The Lomography occultist will pick up any camera and feed it with an old and outdated film. Shooting from the hip and without a care for exposure, focus or composition they record anything without a second thought. There are millions of images on the Lomography website taken by renegade snappers, intent on creating obscure analogue art. Sometimes they succeed, most often they fail. Who cares? No one, the method is random and random is the domain of genius.

Here is the official story:

“The Lomographic Society International was founded in 1992 by a group of Viennese students after they discovered the LCA, a camera created by LOMO PLC of Saint Petersburg, Russia. Lomography started as an art movement through which the students put on exhibitions of photos within Vienna; the art movement then developed into a commercial enterprise.”

The commercial side of Lomography is astounding: I’ll bet it is a multi-million euro business. And good luck to them, it is a fun hobby and is safer than ten litres of Belgian strawberry lager and a packet of pretzels. 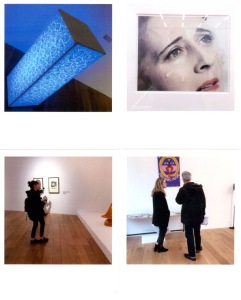 Imaging with Lomography cameras is expensive and none more so than the Polaroid aspect of the genre. Eight images can cost sixteen euro, and it is a hit or miss process. To my mind if the desire is to use the Polaroid SX70 and a few packs of film: a sawn-off shotgun is an essential accessory. Robbing banks is an integral part of the Polaroid ‘snapshot’ process.

Buy the camera (€150) two packs of film (€34) and sixteen frames later the photographer has to perform an act of self-persuasion: his artistic self; needs extraordinary influence to convince his conscious mind the compositions are not blurred and pastel images. The creative being see’s them as Picasso abstract: Does the conscious mind see artistic perfection? No: the photos are what they were in the 1970’s instant, blurred, snapshots. End of story.

Or is it? If the lotto rainbow filled my pot of gold, I’d use the medium once a week. Every image has a unique finger-print and sometimes (very rarely) an instant Polaroid of an old VW Beetle becomes a symbol of contemporary art.

For the moment I’ll use the iPhone to take square images. These are transferred into the Photos app on the Mac and a few tweaks added. Plug in my Epson and print square on 6X4 glossy. Out with the craft knife: cut off the top of the print – Hey! Fake Polaroids: and why not? Until I can justify two pounds an image, Epson counterfeit will have to suffice.

There is also a ‘Polaroid Filter’ App which can be downloaded onto the iPhone if the desire is to really fake it. I’ll reveiw this another time.