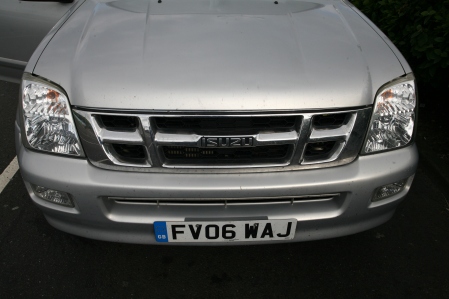 We drive a nine-year-old silver Isuzu PickUp truck. It has taken Liz, and myself to four countries carried tonnes of rocks, camping gear, and equipment. When we purchased it, it had covered 65000 miles, and today the tally is 125000. Sixty thousand miles in four years and we intend to keep it for many years to come. It is already decided that it will not be sold when it is retired it will live in a garage. Retirement mileage for this truck will be 300 thousand. Best not think I am joking, we look after our vehicle.

Each year it goes to the Isuzu garage for a full service and MOT (English roadworthy test) and every six months it receives an oil change and light service. The total maintenance cost (including tyres) averages 750 pounds per year and insurance and tax is a further 600. A total of 1350 per year or twenty-six pounds per week. It has a three-litre engine which averages thirty-eight miles to the gallon. At 15k miles per year that’s approximately 400 gallons of fuel at six pounds a gallon – 2400 per year. Total running cost per annum 3750 pounds or 320 per month. I know people who pay this amount for the finance or lease agreements for their cars. I feel our truck is great value for money.

You have correctly noticed I have not put depreciation into the equation. The truck cost 8000, and it is worth about 4000 today. Seeing as we will not sell the truck and we paid for it outright (no interest) let’s write it down over ten years. This is a depreciation of 800 per year or sixty-six pounds a month. The total cost of running the truck per month over ten years will be £385 (+ or – ?) each month.

We have driven everything from Mercedes to Junk over the years, and Liz and I are unified in agreement: The Isuzu pickup truck is the best and most useful vehicle we have owned. Alice has christened it ‘Suzi Truck’ she always talks about ‘Suzi’ it seems strange Alice may even get to drive it one day.

The name Isuzu means ‘fifty bells pealing in harmony and celebrations.’ Although this is confusion because the name relative to the Company is: Isuzu Jidōsha Kabushiki-Kaisha, the company was named after a river that flows past a Japanese shrine.

Isuzu is the world’s largest truck producer, specialising in commercial vehicles and diesel engines. Isuzu began in 1916 when the Tokyo Ishikawajima Shipbuilding and Engineering company wanted to expand its production to involve automobiles. By 1922, its first car was built in partnership with British manufacturer Wolseley Motors. The Japanese government’s promotion of domestic auto production helped boost the company in the following decades, which resulted in the formation of Isuzu Motors Ltd in 1949.

Now, whether you accept this or not: Isuzu is the world’s largest truck producer, and its diesel engines are acknowledged as the most reliable produced anywhere. In fact, the drive train of ‘Suzi’ is the same as can be found in some of their seven-tonne commercial vehicles. It is a robust and reliable and for all of its hereditary design it is a comfortable means of transport. Seeing how we will be using it for some years to come. It is a bonus we like the truck.

I anticipate there will be cosmetic work ahead. The decision will be for robust and efficient repair: rather than ‘nice to look at and needs work later’ cutting corners. We will have the rusty areas returned to bare metal, heavily rust proofed and sprayed. There is already a sign of rust in one or two areas, and this will be rectified next year. At some stage, the leaf springs will need replacing, and they will be refurbished and galvanised. This is a cosmetic and very long-term solution to further problems. When I owned commercial vehicle’s: I found this was an over the top and permanent solution to the problem of broken suspension leaf springs. And as the truck is silver in colour, galvanised springs will look pretty good.

There is one area I need to address, the aerial which was a ‘coat hanger’ when the truck was purchased. An Isuzu replacement is £160, and I cannot resolve this in my mind. At the moment there is a small and ineffective screw in replacement which is a poor performer. This does affect the ability to listen to our favourite radio station (Classic F.M) maybe we’ll have to bite the bullet and spend the loot. However the CD player is excellent, and iPhone Maps is brilliant for road works or accident warnings so, maybe this will be a compromise. Although, I would like the truck to have radio communication.

We have every intention of moving in the next two-year, and our lock up garage has gone the way of many. It has mutated into storage space: I wonder how many people have followed this terrible path? It is a sure sign of lack of willpower and sloth. A lock-up garage is rented to store your car. Next thing you know, it’s become storage for items ‘awaiting use or eventual disposal’ Our lock up was chosen for excellent security and proximity to our home. We wanted to store a four-wheel two-tonne trailer in the garage. The trailer has better potential for our work, and the bonus would be to remove the ‘hard top’ which covers the back of the truck and replace it with an aluminium tonneau cover. A flat covered pickup can expect an extra four miles to the gallon and to my mind the truck look better. Suzi will have this addition when we move as there will be plenty of secure storage for our trailer.

Some readers may know I write extensively on Selfness and self-sufficiency. Very few people would associate a pickup truck as a roadmap to material sufficiency. However, consider this equation.

If you purchased an Isuzu at say two years old, for fourteen thousand pounds and accounted the running costs similar to my own (a newer truck would be cheaper to feed and maintain) and you kept the truck for fifteen years your cost of motoring would be less than 100 pounds per week. Now you may think: I do not spend anything like that on my car. I would ask you to add up the amount including interest spent on your cars over a fifteen year period. The result will be frightening. If you purchased a 30 thousand Mercedes, it’s worth 15 at best two years later. That is a 15 thousand loss every two years. Multiply this by five (five depreciations over ten years), and you have lost seventy-five thousand pounds. The amount is half the cost of a small home, and this is within a decade.

My contention is this: And it works for a private individual: Buy an Isuzu Pick Up, decide to keep it for fifteen years, and you will save a fortune.

I cannot expand further. My time and word count are up.

Grammar Nazi’s can do as they like – 20 minutes and 1000 words is tough work – Pictures and formatting the post is not included in the time limit.