Ok, so we went to Berlin. Beautiful City and a million and one photo opportunities. My idea was to capture the City’s essence through its architecture and sculpture. The pictures we see here are from one cassette of PanF. I developed the film in Rodinal at 50:1 for eleven minutes @ 20 degrees.

The negatives are sharper than the scans and will yield super images. I have only scanned the frames and slightly adjusted the exposure.

The objective was to see if a humble auto exposure camera and a lens which receives poor reviews could be a good companion throughout the break. I’m not going to make an opinion. Let the images be the evidence and you are the judge.

This is the Museum of Photography a homage to Helmut Newton. No doubt the images in the exhibition are fantastic. I am surprised the photographs are presented with plain glass in the frames: non-reflective glass would be a far superior choice. The images are ruined by reflection of the lighting and indeed the ‘viewer’ of the images. Helmut’s collection of personal items is fascinating. In the collection, we discover he used a Canon EOS 100 film camera! 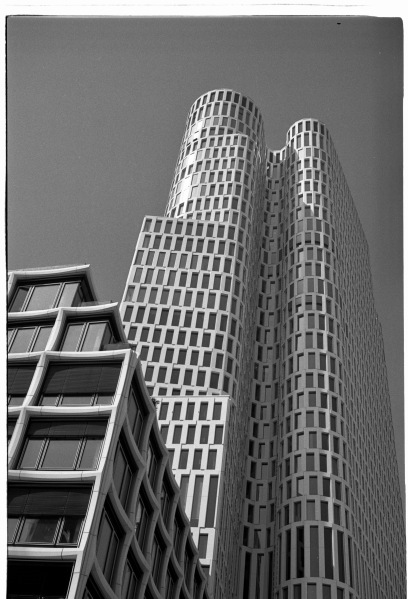 These are four aspects of the same area. The City is in continuous re-build mode and it is easy to see how the sharp-edged City-Scape gives nice abstract photo images.

The Bear is the traditional symbol of the City. Yes, the ‘chariot’ image is poor, I have put it into the article to give the reader a perspective of where the close up comes from.

Unfortunately, the park and monument are in a poor and neglected state. It is evident this ‘statement’ is in the former East Berlin. There is much evidence of neglect and apathy in this area. Lots of rough grass and graffitied concrete, weed-infested walkways, give a real feeling that the West still rules.

At the centre is a sculptural wall surrounded by a small water pool. It is not a monument. It is an architectural design representing the Berlin Wall which used to be nearby. Even though angled you can walk up to the top of the structure.

This is situated along the street (Invalidenstraße) and next to the Naturkundemuseum. 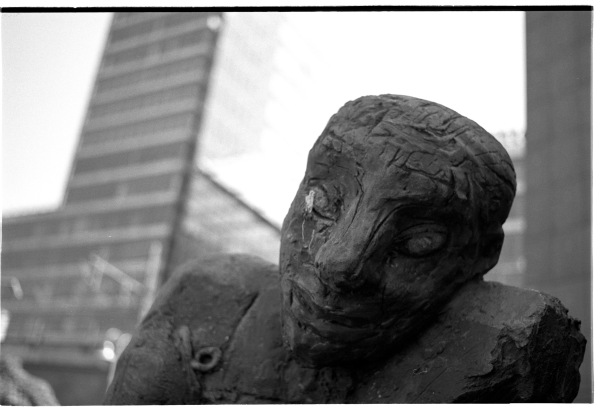 Can the little Pentax MV and the 40mm Pancake be a worthy travelling companion?

One thing is for sure – You do not need too much money to be an analogue photographer.